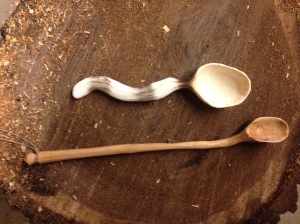 As I’ve been carving spoons, I’ve been thinking about the family connections connected with large cooking spoons.

At the Leesburg Arts Festival, a man stopped to admire my carved spoons. He gathered his family members around him to hear him tell about how his grandparents had a large wooden cooking spoon very similar to one of mine.

“I remember my grandfather telling us that a cake wasn’t ready to be baked until he had sampled it with that spoon,” he told his family members and those of us who were in hearing distance.

“What happened to the spoon,” I was tempted to ask. “Who has it now?”

They walked on without anyone asking about the fate of the large cooking spoon. 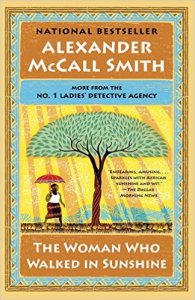 The lead character talks about receiving a cooking spoon from her aunt.

The value of a special cooking spoon was not lost on a woman who had listened to the story of the cake sampling spoon. She selected one for herself, her daughter and her granddaughter.

And a friend who is a fan of Alexander McCall Smith’s “The No. 1 Ladies’ Detective Agency” series reports that in the latest edition (“The Woman Who Walked in Sunshine”) the lead character, Mma Precious Ramotswe, reminiscences about the large cooking spoon she received when she was 8 from her aunt. So Botswana also has the family cooking spoon tradition.

You can select from a range of my large cooking spoons and make a wooden spoon part of the cooking tradition for you or someone special who you give the spoon to. My spoons are finished with food-safe oil to protect the wood and to provide safe eating.