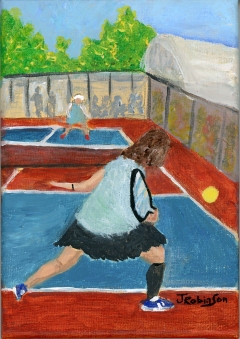 Acrylic painting 5×7 of Mo Royal playing in the Naples Winter Classic, 2020. Original for sale. Contact me if interested.

The day before I played in the mixed doubles at the East Naples Winter Classic Pickleball Tournament, I watched the women’s singles competition at this same Pickleball Capital of the World.

As I watched the matches, I admired both the agility and strategy of the players. For most of the games, the women played at the baseline – not at the kitchen line (7 feet from the net) as is done in doubles play.

I watched the matches of the women who went on to win the bronze (Diane Butcher), silver (Mo Royal) and gold (Margaret Pfister). I followed the series of matches moving from court to court around the Naples pickleball complex to follow their games.

I had watched women’s singles on YouTube, but it’s a very different experience watching the competition in person. You can feel the mood, the energy, the exhaustion.

For the bronze medal match, I recorded the games, standing behind the court fence.  Probably not the best place, but I couldn’t see where I’d stand that would have been better.

Because of my filming location, I was only a few feet behind Mo Royal.  What strength and stamina.  At some point, I realized I was holding my breath due to the pace of the play.

Since I knew neither Diane Butcher nor Mo Royal (playing in the match for bronze), it was hard to decide who I was cheering for. So I cheered for the thrill of the match.  Both women played impressively.  When Mo won the match and advanced to the gold medal match, then I allowed myself to cheer for her.  Mostly because I had been recording so close to where she was and felt much of the match through her eyes.  Bonus, she wears the same court shoes as I do!

All three of these top women played impressively.  I remember watching Diane serve and wondering how long it took to develop such power in that serve.

Ideally, I’d like to find cooperative vs. competitive singles practice for the first while. How else to get the feel of playing the full court?

There are those who’ve played pickleball for several years who suggest that we all need to play in a tournament to get a new understanding of pickleball. I’ve now played in four tournaments and would agree that playing in a tournament helps you appreciate the differences between rec play and tournament play.

There are women who play pickleball professionally who encourage all women to at least try singles pickleball.  I’m looking for a way to try.

Below: Women’s Singles 3.5  for Bronze

Below: Women’s Singles 3.5 for Silver and Gold

← Pickleball Capital of the World
Artist-in-Residence: Painting and social distancing →