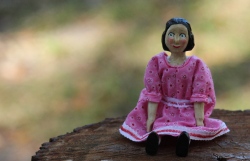 Working with wood is an ever evolving and exploring process. I’ve found that one project-idea often leads to another project.

And the new wood project for me? Carving small dolls.

How did that happen?

Creating WrenSong flutes and WrenSong kanteles requires larger equipment like a router, bandsaw, woodturning lathe and sander. Smaller tools are required too — such as the woodburner, chisels, and small planes —  but much of the work is done using power tools. Add several coats of shellac that take a few days to administer, dry, repeat and allow for  curing and you realize the process of making musical instruments as I do is not a portable one.

I was looking for smaller wood projects that I could create while traveling.

Carving wood spoons became an on-the-road project. If I had some space outdoors and a little time, I could use my saws to obtain wood,  axes to shape my spoons and carving knives for details in the spoons.

But I needed an even smaller project – one that wouldn’t require that I carry an axe or saw as these don’t readily fit in my purse. I began to look around for something I could make from items I’d be able to carry in my purse.

Then I discovered Hitty in my online travels.

Hitty is a 6 ½” wood doll that is based on the Newberry winning book Hitty: The First Hundred Years. The doll’s real name in the book is Mehitabel, but that’s too complicated for the little girl who first owns the doll and she shortens the name to “Hitty.”  Based on the book, I carved my first Hitty doll from branches of a horse chestnut tree.

Then I found a Hitty Yahoo Group.

What enthusiasm there is for Hitty. Some Hitty fans have incredible collections of the dolls and others create elaborate scenes showing Hitty with friends and completing a range of activities.

Immediately, I could see Hitty as my travel companion for woodworking. With her small size, she and my carving knives fit into my purse or backpack.

I had ordered a Judy Brown Hitty blank to study the doll’s construction and type of wood she used to carve. JB dolls are a little more articulated than mine — that is, its joints move in more directions.  My doll’s arms 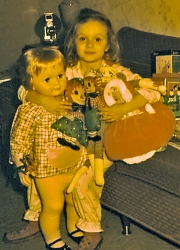 and legs attached with pegs move in tandem.

I carved a few Hitty dolls as gifts for family and friends.

I’ve posted a few of my carved Hittys for sale in my Etsy store. They are carved from Poplar and Butternut.

At first, carving dolls seemed a little surprising for me. But as I’ve carved Hittys and gotten to know them, I can see that they are enabling me to capture some of my youthful enthusiasms.

A few years ago, my father emailed me a photo he’d taken on Christmas Day when I was four. You’ll see that the gifts I received from my parents and relatives were dolls – from a doll almost bigger than I was to Raggedy Anne and Andy to a sock monkey.

When I was several years older, I began sewing clothes for my Barbie-sized dolls. My mom was delighted that I was interested in sewing, as she sewed clothes for the family, including some matching outfits.

So now, I’m carving Hittys and making their outfits. Whereas my focus when I was making outfits for my childhood dolls was trying to help them look contemporary in their attire, with creating clothes for Hitty, the goal is to dress her in her original time period – in the 1800s.

Aunt Elizabeth, who has helped her daughters and grandchildren learn to sew, has been a great aid with my sewing. We’ve had sewing lessons on Skype and she has provided me with all kinds of tips that have helped me sew tiny clothes once again.

Elizabeth is quite imaginative and often designs a new outfit for the small dolls.   Hitty Poppy (carved from poplar) right, is modeling a new Spring dress designed by Elizabeth.