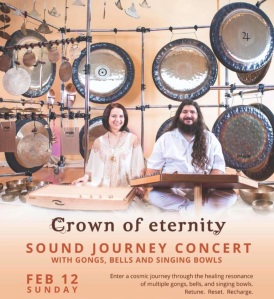 Making and playing both Native-American style flutes and Finnish kanteles has led me into thinking more and more about creating a calm and positive spirit.

I’ve found that many who purchase my musical instruments are interested in playing to have more peace in their lives. Some are music therapists who use my instruments in their work with individuals and groups.

So that interest in expanding my awareness about the power of music led me to being part of the “Sound Journey Concert” at Flow Space in Gainesville.

The concert goers arrived in relaxed attire and with yoga mats.

The two leaders sat in front of gongs and bells that were arranged on a series of metal tiers.
The leaders explained how the concert would proceed. The eight octaves of gongs, bells and singing bowls would be played, and we would be awash with the sound, overtones and harmonics. We were to be active listeners, following the reverberations.

The concert would be an individual experience, we were told, as each of us would respond to the tones differently. We might feel vibrations in our bodies. We might have ideas come to mind that we could put aside until later.

We went through some breathing and relaxation exercises, and then we became comfortable on our yoga mats, breathing calmly, as the music began. The sun was setting 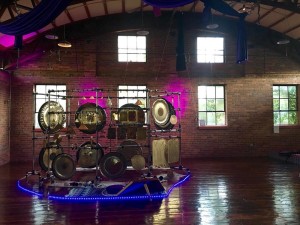 as we prepared, and by the time the first gong was played, the room was in semi-darkness.

I had heard of “gong baths” but had never participated in one. So I knew that I would be immersed in sounds.

The concert started with hammered dulcimer. From there, the musician stood up and moved into the center of the area surrounded by gongs and bells. Using mallets of various sizes, he began to play. One set of chimes reminded me of a relative’s clock. The high-range tinkling of bells sounded like a gurgling stream. The large gongs – some larger than a cardtable top – created a huge deep tone. I almost felt like I was in a Star Trek movie going into another dimension.

At one point, I could feel my hands vibrating, which I thought was good, as I use my hands so much in carving and working with wood.

I was surprised when there was silence. The concert had lasted almost two hours, but it felt like only 30 minutes had passed. We went through some breathing and movement activities, and then the lights were raised.

It was indeed an unique experience producing a calmness that led to a great night’s sleep!