A Second Chance to Play Flute or Kantele

When I’m selling my flutes and kanteles at music festivals or art and craft shows, one of the groups of people who like to talk with me about my instruments are retirees.

I often start the conversation with “Do you play any musical instruments?”

In the responses from retirees, I hear two themes.

About half will tell me about playing a musical instrument earlier in their lives – playing the clarinet or flute in the high school band or taking piano lessons. But then their lives changed with job and family demands and they quit playing. They haven’t played an instrument for perhaps 40 years and have missed it.

Now that they are retired, they have the time to return to their love of music.

The other group of retirees typically respond, “No, I never have played anything. I’m not musical.” They often go on to tell me of a sibling who had the musical talent. They often seem wistful as if they have carried this regret with them throughout their lives.

Many of those conversations lead to me playing the flute or kantele, then the person tries out the instrument. They usually are surprised how easy it is to play one of my WrenSong flutes. On the first try, many produce a well-rounded tone — and seem surprised it came from their effort. 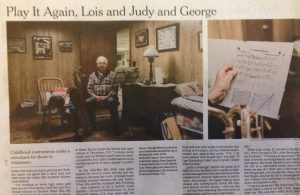 I was interested to read Joanne Kaufman’s story in the News York Times about retirees’ musical interests. Kaufman interviewed retirees in those same two groups – those returning to the musical interest of their youth and those who felt like they’d missed the opportunity for music growing up and are now catching up.

Playing a musical instrument also provides a social element for those retirees who chose to be part of a music group. Kaufman interviewd the founder of the New Horizons International Music Association, which works with adults over 50 who want to play in a group. The nonprofit program has 10,000 participants in 232 bands and orchestras around the country.

In Gainesville, we have a number of adult music groups, including the Gainesville Flute Circle, which meets once a month.

She also interviewed Denise C. Park, the director of research at the Center for Vital Longevity at the University of Texas at Dallas, who advocated playing music to help “maintain cognition in older adults.”

More often the retirees I talk with discuss the fun, meditation, mindfulness and sense of accomplishment of playing a musical instrument.

Retirement provides a second chance to learn a musical instrument.  You can enjoy for yourself by purchasing one of my WrenSong flutes or kanteles. Both come with a music book I’ve written to help you start playing within minutes.

The New York Times article was published online with a different title — I like the print version better — “Play It Again, Lois, Judy And George.”   As suggested in the title below, cats will not flee the room when you play flute or kantele. They’ll curl up nearby and listen.