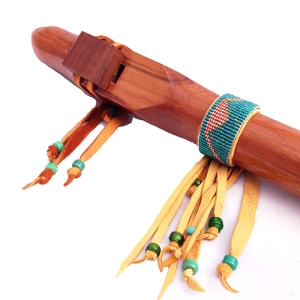 Recently I had the honor of playing at my mother’s church service with my Native American style flutes.  The opportunity was spontaneous — as people were coming in for church, I pulled a branch flute and a maple G flute out of my purse and began to play a few hymns.

Everyone seemed to like the hymns and some sang along with me on familiar hymns.  Then they wanted to see what I was playing (Native American style flutes are not ubiquitous), so I stood and faced them.

When the preacher came in, he insisted we continue the music with my flute-playing.  After several hymns with all the stanzas, I knew my flutes were wetting out.  The preacher was fascinated and wondered aloud to me how I could keep playing the whole hymn and not be out of breath.

I forget that one’s breathing does improve considerably when one begins to play the Native American style flute.  And I forget that I get asked the question a lot — how are you able to breathe and keep the song going?

The answer: Phrasing and One Breath Solos.

Phrasing on the Native American style flute is the goal of playing the first 3 or 4 notes of a song with one breath. (Yes, phrasing means other things too in the music world.)  For example, with the hymn “Blest Be the Tie that Binds,” you take a big enough breath and control it as it goes through the flute to get notes “blest be the.”  Then quickly take another  breath that will get you through “tie that binds.”  Eventually you will be able to play the whole line “blest be the tie that binds” with one breath. And with more practice you will eventually be able to play “Blest be the tie that binds, Our hearts in Christian love” with one breath.

One song that the people enjoyed both singing with and listening to was “What a Friend we have in Jesus.”  I played it three different times and everyone loved it afresh.  At the end of this post is a version of this hymn with a Bm flute and kantele.  The Gm flute I played in church was lower in pitch, but if you listen carefully, you can hear me breathe in between phrases!

One breath solos are something that we practice in the Flute Circle.  When Flute Circle first started, we all were breathless after two notes.  We started each Flute Circle with one breath solos.  The idea is that you can play for as long as you want and as much of a song as you want as long as you are playing on one breath.  At first this seems hard.  But interestingly enough, you can tell when folks have practiced this at home during the weeks between Flute Circle.  What happens is that eventually people can play almost entire songs.  One man played almost all of “Amazing Grace” with one breath.

Two things happen with the one breath solo exercise. First, you learn to take deeper breaths — more air is drawn into your lungs.  This has many health benefits — I read much about how we don’t breath often enough or deeply enough in our hectic world. And remember what you are told to do when anxious or angry?  Take 3 deep breaths, expel them slowly and you will not feel quite the same.  Ideally, you feel better with more self control.

The second thing you learn with practicing the one breath solo is to guide and channel your breath more efficiently.  You don’t blow all your breath out with the first two notes.  You measure it out so it will last for the entire phrase — or song.  This has the added benefit of creating a consistent and pleasant-sounding even tone to the music you create with your flute.

I’d like to think that in a calm and reverent way we are increasing our lung capacity. Such growth has all the earmarks of becoming mindful Native American style flute players.

Yes, playing the Native American style flute teaches us how to breathe mindfully.

← Music and healing
Carving and turning at Arrowmont →