Squirrels in my car’s engine

As I was cleaning off an old, slow computer, I found some photos that reminded me of my experience with squirrels.

About 10 years ago, I was driving home from work and all the lights in my dashboard suddenly started blinking and going rather wild.  I continued the 5 minutes home wondering what was wrong with my car. The oil light was on, the air bag lights were blinking, a turn signal was flashing and wouldn’t turn off.

It had been a hectic week and I needed the car in two days to drive to an out-of-town  meeting.  I drove the car to my Honda dealer the next morning on my way to work.  My Honda serviceman called me that morning to tell me the cause of my engine problems. 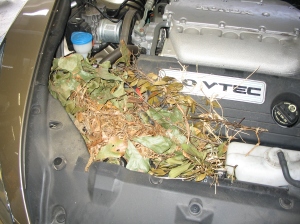 The nest — overflowing from the headlight cavity.

I had 4 baby squirrels living in a nest in the headlamp cavity under the hood of my car. Apparently Leonard, the mechanic, had opened the hood of the car, unknowingly reached into the ample-sized nest only to have a baby squirrel wrap its furry tail around Leonard’s hand.  Leonard was traumatized.

The real problem was that the baby squirrels were now investigating their world (my car engine) and eating their way around the various wires. It was difficult to determine how long they had been savoring my engine.

At the Honda place, everyone was intrigued by the squirrels in my engine.  They removed the four squirrels and put them in a box to keep them for me when I returned at the end of the day. Apparently, I had to decide what was to be done with the baby squirrels.

At some point, the squirrels climbed out of the box and were going to investigate the Honda showroom.  Immediately,  one of the receptionists was asked to take the squirrels to a woods behind the Honda place.

As she stood in the desolate woods alone, placing the little squirrels on a tree trunk, a form arose from beneath the many leaf piles in the woods.  That was when she realized she was standing in a circle of sleeping, homeless men who had been covered in the leaves.  She did not stay to take photos of the squirrels on the trees but ran back to her desk.  The manager later told me that something would need to be done about the homeless camp behind the car lot. The receptionist had been traumatized by her encounter.

I called my insurance company and they had many questions.  Had I driven the car with the dashboard lights out of control?  Yes, how else to get to the garage.  I was told I was lucky the car had not burst into flames or blown up.

Had I looked under the hood? No, that’s what I have a Honda service center for.  From now on, I will always pretend I know how to fix my car by first checking under the hood.

I asked if rodents in the engine was a problem covered by my insurance company, and I was greatly relieved to hear it was.  My insurance agent noted that rodents eating plastics and wires in Honda vehicles was not uncommon.

Who knew!   If you Google  “rodents eating Honda engines,” you will find incredible stories of  squirrels or mice savoring engine wiring.  If I recall correctly, it is something to do with the chemicals used in the plastics. 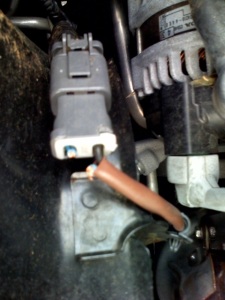 Wires and connectors were totally detached in several places. It was a wonder the car started.

My insurance adjustor said he found looking at the engine very interesting.  At the time he talked with the Honda service people, the estimate of damage was $1,500.00 US.

I left the car with the service center for at least a week before they had scoured the engine to find all missing wire pieces and punctured hoses.

When I went to look at my car, the Honda manager had taken photos for me, but he didn’t know how to get them off his phone and email them to me. Since I taught digital media at that time, I was able to show him and several of his colleagues how to get photos off a cell phone and email them.   This was in 2006 when the feat of emailing photos directly from your cell phone was not possible.

As I pulled into the lane in a rental car the night after the day when the squirrels were discovered in my engine, I noticed a lengthy piece of wire that would have fallen out of my engine.

I also noticed that same darn chattering squirrel on the trunk of the palm tree.  I’d noticed how she was always there whenever I left for work or came home. As if she was scolding me.  But of course, I realized, I had been a day care for her 4 children.

News of the squirrels in my engine spread quickly at work and I was told a colleague had the same problem a few years ago.  As I visited, seeking his advice to prevent future attacks, he told me to reduce the squirrel population in my yard.  This I did by borrowing a squirrel cage from him, placing a cracker with peanut butter inside, luring the squirrels into the cage. I drove the captured squirrels far off into the woods to release them.

His other suggestion was to spray my engine with a mixture of Tabasco sauce and water.  The first time I did this, there was too much Tabasco sauce in the mixture and as I drove to work with the engine air swirled in through the vents of the car. The hot sauce floating through the vehicle had me crying all the way to work.

Since that time — ten years ago — I sprinkle hot chili pepper flakes over my engine at least every two months.  And if it is a cold fall (as it was the year this happened) when a mother squirrel might want to keep her babies warm by building a nest in the engine of my car, I spray that hot sauce on the engine every month until the cold spell is gone.

Shortly after I got my car back — wires mended, plastic replaced — it was still a particularly cold fall.   I worried that still more squirrels might be born that year.

No it couldn’t be possible that there would be a second nest built that fall.   But when I opened the hood of the car — a week after it had been back in the lane —  there was a stick of significant size set in the cavity of the headlamp.  The base of a new nest!

I broke out a new bottle of Tabasco sauce.

One year from today, this was #sunrise The #view at #montserrat from our hotel room. That day we hiked to #santjeronimontserrat #Acrylic #painting on #oak panel. You can see the #grain of the #wood beneath the #paint! #montserratmonastery #barcelona #acrylicpainting