The bird is such an important part of the Native-American style flute, but many people, even some beginning flute players, view it as just an ornament. 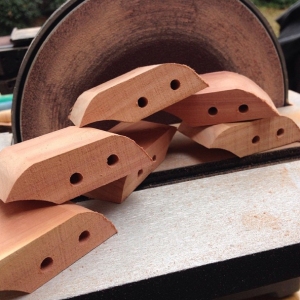 Rough-cut cedar birds, drilled and ready to be sanded and polished. The laces will be added when the bird is custom-fitted to its flute.

The bird – or block or fetish, as it is also called – is key to the sound the flute makes.

Placed correctly above the flute’s slow-air chamber, the bird provides just the right air passage, and the flute plays as it was designed to play.

An incorrectly placed bird or substituting a different bird on the flute can greatly affect the sound and may even make the flute not play.

One of the custom features of my flutes is how a build the bird. I drill holes into the side of the bird and thread the laces through the holes. Then the bird is secured to the flute.

By having the laces threaded through the bird, you can easily loosen the ties to let the flute dry after playing and still have the bird with the flute. You don’t have to worry that you might lose the bird, which is true for many flute designs with the bird being separate.

As a flute player, as well as a flute maker, I know first-hand how having the laces secured with the bird can make it easier to dry the flute and keep up with the bird.