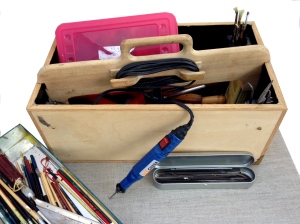 Uncle Chuck was quite the woodworker. He made wonderful wood gifts for family members, like the carved duck that he gave my dad more than 30 years ago. The duck has such realistic detailed feathers, I can almost imagine it taking flight right off the table where it sits.

One of the first things he made for me as a small child was a big wooden toy box with my name in big red letters, cursive style, on the side.  I used to wheel that big wooden toy box around my bedroom when I grew tired of playing with the toys inside the box.

Uncle Chuck passed in March, two months earlier than his younger brother, my father.  Uncle Chuck’s children (my cousins) decided to give me their father’s woodworking tool kit. They knew he wanted someone to receive his tools who would really appreciate and use the tools, and they knew that I am a woodturner and wood crafter. 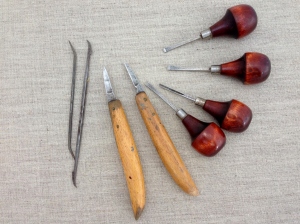 The day I received the tool kit from my cousin David, I explored the kit and marveled at what a wonderful gift I had received. When I picked up one of the small gouges, it was like I could feel the energy Uncle Chuck directed into his carving.

A box of of chisels, gouges, files and rifflers with all variations on widths and angles for making small carvings.

A variety of little rifflers. At one point, I wouldn’t have know how to use those, but now I do. Several of them are just what I need to work on my wood flutes.

Files with different grits for sanding and finishing.

Dozens of paintbrushes of different sizes. When I opened a metal box that contained paintbrushes, I saw that he had used the inside of the lid as an artist pallet to mix the paints.

The box itself is well designed with a handle for carrying and several special compartments for holding brushes or files.

I was inspired just looking at the tools.  I’m honored to given and be able to use the tools. They will contribute to the work I do, and I will think of him as I use them.