This past weekend was the Florida Earthskills gathering.  Aunt Maggie had told me about it when I met her at one of my Christmas craft shows.   The website for the Florida Earthskills had a number of intriguing workshops listed. Would I attend a 3-day Bamboo intensive? Would I attend a half-day of spinning Spanish moss?  With the cold and rain this past week, I was glad I settled for a half-day class on a sunny, somewhat warmer day: Fuz Sanderson’s  3-hour workshop on making a bamboo didgideroo. 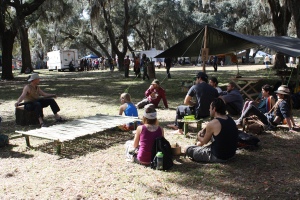 We were surrounded by huge live oak trees dripping with Spanish moss.  Smoke from nearby campfires gave you that wonderful “I’m camping in the great outdoors” feeling. Fuz was comfortable and humorous talking with the group that showed up for the workshop.  He gave a history of the didgeridoo, an instrument originally played by the Australian Aborigines.  He also got us primed to work with bamboo by sharing characteristics of the grass (yes, bamboo is a grass) and recommended that we wear gloves to avoid getting the itches from the silicates in the grass. Our tasks were to get our bamboo, cut it to appropriate size, hollow it, and shape the mouthpiece.

The next stage was to fire the didgeridoo which hardens it and releases moisture and resins. As you burned an area of the bamboo stalk, you would then wipe it with a towel to remove the resin and dirt.  What’s left is a patterned and smoother stalk for the didgeridoo.

The final stage, before learning to play, was to add a beeswax mouthpiece on the didgeridoo.  With a bit of sun to warm the beeswax and much molding with the piece on the end of the digeridoo, the idea was to make a softer and smaller opening. To keep the bamboo didgeridoo from cracking, we are to oil it occasionally with something like walnut oil. Several of us were excited to play the digeridoo.  However, it is not as quick to learn to create a sound with as, for example, the Native American style flute. It is not until a day later that I have successfully created a “didgeridoo” sound.  Playing this didgeridoo will take some practice.

I was delighted to learn that Fuz also played the Native American style flute.  He brought out a couple of his bamboo flutes — one a drone — and played.  Of course, we know that the flute and the didgeridoo make beautiful music together. The workshop was absolutely great.  I learned much and Fuz did a great job explaining many details of each step.

I have recorded my early efforts playing the didgeridoo.  I’ve not quite got the sound beyond a motorcycle roaring past.  And certainly I haven’t even thought of “breathing circularly”.  Each pause in the didg playing is a huge gulp of air!

Below:  F# minor Native American Style Flute with Didgeridoo.  One Day after making Didge and a bit of practice.

Update Below:  One week after practicing on the Didgeridoo (with F# Native American style flute)