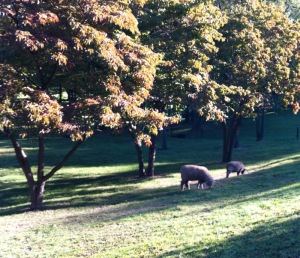 The setting for the Flute Haven Symposium is idyllic and pastoral. Perfect for relaxing and enjoying your flute.

I will be sharing my flutes, kanteles and ocarinas, and will be teaching three classes.

• The Joy of Ocarina – Participants will have the opportunity to purchase one of my wood ocarinas for a special fee and learn how to play.
• Playing Simple Stringed Instruments with Flutes – I’ll be sharing my 5-string kanteles and joining with Lynn Miller and Jon Norris to demonstrate how beautifully the Native American style flute plays with such stringed instruments.
• Q&A about Making Native American Style Flutes – I’ll join invited flute makers Brent Haines and Jon Norris on a panel where will talk about how we make Native American Style Flutes and answer questions you may have.  I’m looking forward to this because while some principles for flute-making are standard, each flute-maker has her or his own style.

Attending my first Flute Haven in 2012 was a great experience for me as a flute player.

Vera Shanov plays drum outside while Pat Smith and Marcia Bendo (background) hear the beat and play their flutes in tune with nature.

Here are some of the reasons I enjoyed Flute Haven and think you will, too.

The focus of Flute Haven is to help you become a better flute player and enjoy your flute playing without being self-conscious.

We had many opportunities through the workshops to develop our abilities as a flute players. Beyond improving our solo flute-playing ability, we learned how to play a “dialogue” with another flute – playing back and forth with a partner.

You’ll love learning and sharing where to find inspiration — outside or inside.

We learned how to play with other musical instruments. I played with the harp, piano, guitar and many different rhythm instruments.  Since I’d never been sure just how a flute in a specific key could work with tuned instruments, exercising this ability at Flute Haven has changed my joy of playing immensely. 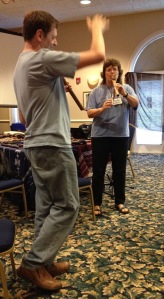 Judy has a flute lesson with Cornell Kinderknecht. Photo by Marcia Bendo.

I opted to have a lesson with Cornell Kinderknecht.  The way that was going to happen for me was if the lesson worked as an example in front of everyone.  Admittedly I was nervous, but Cornell has such a great sense of humor that the time passed quickly.  I wanted to learn strategies to work on a vibrato.

With Cornell’s coaching, I learned much more.  Breathing and control were just the beginning.  Cornell was patient both explaining and showing strategies.

You don’t have to do your lesson in front of everyone.  Several people signed up for one-on-one lessons in more private formats.

3.  Learn to play with backing tracks

Backing tracks are recorded music that you can use as the background for your own flute playing.

We spent a couple of evenings just hanging out and jamming with each other.  People brought their own speakers and hooked up their iPhones to them.  Bette Acker showed us great places to download backing tracks online for free.

Some of the group at Flute Haven 2012

Being able to play with backing tracks opens up a whole range of new music you can play because you have your own accompaniment with you wherever you might be (if you put it on your iPhone).

There are some free backing tracks provided at http://www.flutehaven.com if you want to download and try them right now.

4.  Meet others who really enjoy playing the flute

The day is filled with opportunities to play flutes and talk with others who are enthusiastic about playing the flute.

We’d meet in workshops but also talk during meals and walks on the beautiful grounds of NCCC, where Flute Haven is held.  The venue could be a reason to attend Flute Haven as it is peaceful, inspiring, and with good weather offers great paths on the property.  The food (included with staying on the grounds) is excellent as is the dining room.

I’m in contact with many of the people I met at Flute Haven, and we continue to motivate each other’s appreciation of the flute and playing it regularly.

5.  Learn to improvise on your flute AND sound good

A fun part of Flute Haven was learning to play “improvisationally”.  Learning to feel the freedom of playing what you feel and hear without having to read music or follow a prescribed tune is invaluable.

On several nights, a group from Flute Haven would go to an area restaurant that had a performance setup, and we played improv on stage. How exciting to have a common goal of creating meaningful music together!

6.  Find out about the healing power of music vibrations

Lynn Miller, a trained music facilitator and music therapist, demonstrated how the vibrations of flutes and of drums can help promote relaxation.

Flute Haven has a great team of facilitators who help lead classes, set up improv groups, and work with participants one-on-one. I really enjoyed working with the facilitators when I attended Flute Haven and getting advice and insights from each of them.

And I’m excited that I will be one of the facilitators for Flute Haven in 2014!  I know how much I appreciated the friendliness and approachableness of everyone who was part of Flute Haven 2012.

Over the next few months, I’ll be writing more about Flute Haven, the workshops I’m leading, and the flutes, kanteles and ocarinas that I’ll have with me for sale.

In the meantime, I encourage you to subscribe to Clint & Vera’s newsletter to read about news, ideas and thoughts about our flutes.

Below is a video of that plays a soundtrack of one of our nights of freeform jamming.  Accompanied by photos of the time in 2012.