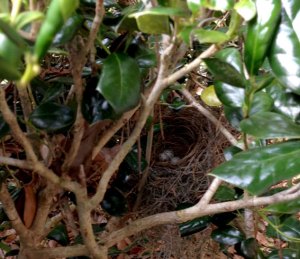 When I came home one day, the cat was winding her way on tiptoes through a complex maze of delicate branches in a bush. This was an unusual activity for cat.

Thirdly, if there should be a “toad strangler” (Florida term for heavy downpour) then the water will gush off the roof and hit the bush right about the spot where the nest sits. Instant flush.

I went to move the nest, to a higher, safer, nearby bush. But as I reached for it, I saw three eggs.  If I touch the nest, now that the eggs are in it, will the parents return? Not that it hasn’t already got cat-breath on it.

Not sure how to save the future cardinals.  If I build a shelter, I’m sure all the activity will scare away the egg-sitters.

Maybe it’s time to get some chicken wire, as both a friend and my sister have suggested it.