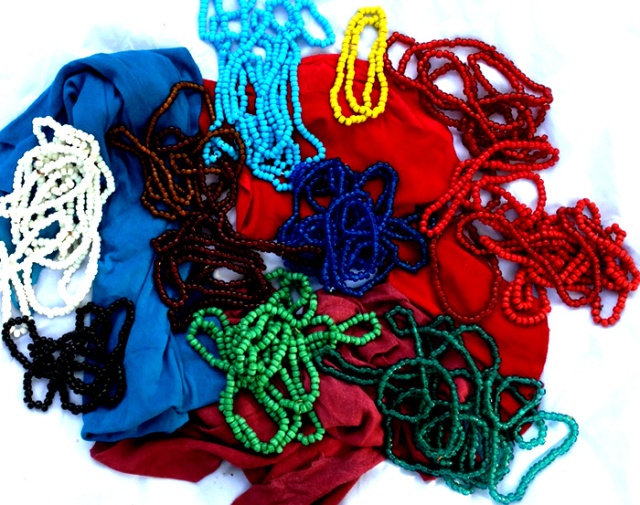 Recently, I have been building several E minor Native American flutes.  As I neared the end of the wood construction part and started making the birds for the flutes, I realized I was low on my leather strips that hold the birds on the flutes.  And I was very low on crow beads.  Crow beads are the decorative glass beads that are strung on the leather strips that hold the bird on the flute.

One of the first Native American style flutes I ever made was an Em.  It is a beautiful low tone but not so big a flute that it is hard to hold or play.  After learning by making a bunch of PVC flutes, I wanted to make a cedar low-tone flute.

I had gone to Michael’s craft store and bought leather strips to hold my cedar bird onto my flute.  That week I would be going to our monthly flute circle, and I wanted to show my two flute teachers the carefully crafted flute I had made — complete with leather strips.

Back then, I did not have a lathe or know how to turn, so the flute was sanded into a rather squarish shape.  As I tied the leather strips around my squarish-shape flute, the leather kept breaking.  This was not strong suede.  So I used a piece of hard leather (that I had purchased in order to make ukulele straps) instead.

Thursday night arrived, and I took my new cedar flute to flute circle.  My teachers were kind.  They understood the squarish rounding that comes from sanding a flute.  They knew I was over-quick to make a larger flute (master the smaller ones first, Judy) and press the laws of physics (the larger the flute, the greater the sound chamber) to make the sound I so desperately wanted to hear.

But when it came to the leather strip holding on my bird, they were absolute.  “It has to be the right kind of leather. Not just anything you have on hand will do”. Each of them held their flute high so I could see the leather strips with beads and feathers hanging before me.  I could smell the suede.  Then they told me where I could find this leather.  Spotted Pony Traders that would be at the Chambers PowWow.

And I did find Spotted Pony Traders.  Several years later, I have purchased many a bead, leather and more at the PowWow from the Spotted Pony.  Cindy has answered many a question.

But just a few days ago, I made my biggest purchase ever from Spotted Pony.  Bundles and bundles of colors and suede strips to hold birds on the flutes.  An array of crow beads — translucent, solid.  So many colors to choose from.  And large swaths of leather — turquoise, garnet, blue — to use as backings on the flute wraps for the flutes.

It was all so bright, tantalizing and colorful, I just had to take the picture.