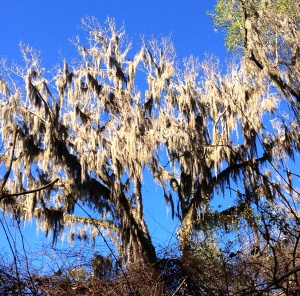 Spanish Moss — grayish green wisps that drip and sway from trees.  The moss has held me in its spell for some years now.  It is the stuff of movies and wonderful mood photographs. Yet, in some sense is so ethereal no one notices it.  I have my own stories of Spanish Moss.

I write about Spanish moss because I want to weave it.  Calusa Indians used Spanish moss.  It’s all over my backyard.  Everywhere I walk these days has Spanish moss either on the path or hanging over it.  So I have collected Spanish moss to weave.  I’ll cover that info in parts 2 and 3 of this series.

A first awareness of Spanish Moss

My mother used to gather Spanish moss from trees when we would visit Florida on travels.  Every March when we were growing up, our family would drive to Florida and warm ourselves in the sun and sand.  It was never cold — always much warmer and devoid of snow that we had in the North.  As we turned the car to head home, mother would exclaim, “Oh, I need to get some moss for my plants.”  She used it in the base for her artful flower creations.

Dad would pull the car up near a tree dripping in the moss and mom would say, “How about that tree over there?  It looks a fresher green.”  Mom would fill plastic bags and the remaining space in the trunk with her treasure for the next year. 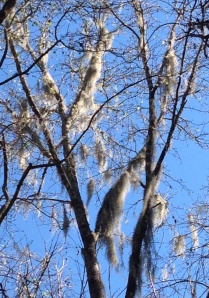 Years later, when I thought about how to share and show the “South” to my students when they studied “To Kill a Mockingbird,”  I thought of Spanish moss and how much mood it conveys.  The students, grade nine, had little knowledge of other countries or parts of the world. Few, if any, had left the rural enclave where they’d been born.

On my next visit to Florida, I gathered my own moss in a plastic bag  and when I got home, I examined it further, sealed it tightly in a plastic container and placed it in the winter closet (filled with scarves, mitts,  winter coats and cross-country skis). I would use the moss the next fall semester.

At least six months later, I opened the sealed container, examined the moss closely and took it to school with me for first period grade nine English class.  I was sure they’d never seen anything like this.  The 35 grade niners were also my delightful homeroom group. Since they hung out in the room long before the playing of the national anthem, Lord’s Prayer and daily announcements for the day, I brought the Spanish moss out to let them pass it around and discuss its nature and how it grew.

Time passed and time for the national anthem approached.

I must mention here that our very new principal in the school had entered my room and was clearly going to join us for the class.  As teachers, we knew that she would be doing “surprise” visits to our classrooms for evaluation purposes.  She had , however, given explicit instruction that she neither wanted to be introduced to the students nor have any notice given of her in the room.

This was difficult, and very opposite to my typical behavior to introduce anyone who would be joining us that wasn’t part of the class.  We studied literature; we were interested in details.  We acknowledged everyone who entered and stayed in our classroom world. But after a brief nod of recognition,  I did my best to act as if she were invisible.

Morning announcements began, and as usual, students stood up beside their desks for the national anthem.   I moved from my desk to the front of the room to be, as we had been instructed to do by our new principal,  “visible as an example for the students”.  At that point, I  noticed the Spanish moss was in a heap on the desk of Nataysha, the quietest most unassuming girl in the room.

Somewhere, at about “… true patriot love, in all our Son’s command … ” Nataysha let out a tremendous blood-curdling scream.  I froze and looked at her, hardly comprehending she had the capacity for such volume and pitch.  She pulled back (but – bless her – still tried to stand at attention) and pointed at the Spanish moss.  One of the twin boys, Dan, in front of her, turned, and acting quickly, jumped onto the desktop (a dangerous move at any time) to join the Spanish moss.  He then brought his giant work boot down on the Spanish moss. By now, I had moved to a position to steady Dan and help him down from the desktop. 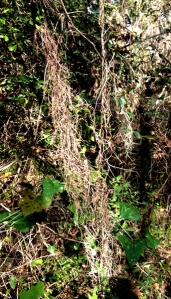 Spanish moss on as it appears in a Florida hammock walk. You can see, now, there might be some ominous overtones. (Click for larger view.)

The source of shock was  (the largest I had seen at that point) two-inch long Florida palmetto bug.  It was what these students might guess was a cockroach.

Nataysha had wilted in a nearby desk as the refrains of  ” … we stand on guard for Thee … ” dulled in the background.  Suddenly the whole class grabbed their noses and groaned. The “green apple” smell of a squished palmetto bug filled the room.  Briefly I glanced back to where the principal was (to see if she dramatically plugged her nose like all the others) but she was unwavering as an example of attention to the national anthem.

I scooped up the Spanish moss and squished bug body (ugh, to be so unflinching) with a piece of foolscap, opened the classroom window to the teacher’s parking lot, and dumped all onto the pavement.

When I turned, Nataysha had recovered and was standing at attention, as were all the other students.  All eyes were on me as I returned to my spot at the front of the room for the final refrain. I shuddered, then smiled at the students to assure them everything was all right.  Then, I steeled myself and glanced back at the now frowning principal.